Lauma Vernere graduated from the Stockholm School of Economics in Riga (SSE Riga) in 2014 and is already a Management Partner at ELKO Group, a Riga-based wholesale distributor of information technology (IT) products and solutions with annual turnover exceeding USD 1.5 billion.

After two and a half years at the professional service company Ernst &Young (EY), she was hired as executive assistant to the CEO of ELKO Group, also an SSE Riga graduate. Her work quickly evolved and “grew out of the assistant role to basically being a middle person between the CEO and the management team that needs to make sure that their objectives are aligned,” Lauma says. “The role involves not only ensuring that smooth communication is taking place between all parties, but also practically managing strategic initiatives for the whole group to flesh out the CEO’s ideas.”

SSE Riga prepared her for this by creating an intense academic environment where students must manage and prioritize their workload. The school’s three-year programme leading to a Bachelor of Science (BSc) makes students “develop a work culture in which time management and task prioritization is seen as a hygiene factor and the problem-solving mindset just becomes a part of who you are,” according to Lauma. “I came out with a structure for doing my work.”

Lauma specialized in finance in her third year at SSE Riga and honed her skills in the Transaction Advisory Department at EY, which focuses on company mergers and acquisitions (M&A). “I see EY as a sort of SSE Riga extension – many graduates go there and learn how to apply their diverse theoretical knowledge in practice,” she says. Lauma also put her knowledge to the test by entering the chartered financial analyst (CFA) programme, which is notorious for its difficulty. “I managed to pass all of my CFA exams on the first try and this was largely due to the fact that most of the things in this programme were just a repetition of what I had already studied at SSE Riga,” Lauma says.

All of this experience has been useful at ELKO, as she can provide added value in finance-intensive activities that would normally fall outside her job description. “ELKO Group has been quite active in the M&A field and due to my experience, I can be a competent addition to the project team. Also, there are other “out-of-scope” projects I get involved in just because of my background. For example, I was driving the development of a new mechanism for allocating headquarter costs to our sales offices – normally such a project would be led by the Finance Department, but my background in finance combined with my role as middleman between all the departments put me in a great position to actually roll out this initiative,” Lauma recounts.

With a class size of 130, mostly, but not exclusively from the Baltic countries, SSE Riga also puts students into a network of contacts that will be useful throughout their future careers. “The first thing SSE Riga gave me was a sense of belonging, being part of a supercool network. Whenever you meet someone from SSE, you have a feeling that you already sort of know each other. And the best part is that there is someone from SSE Riga in every big company in the (Baltic) region,” Lauma says, adding that “the degree is a door opener; the SSE Riga diploma carries an indication of what the person can do.” 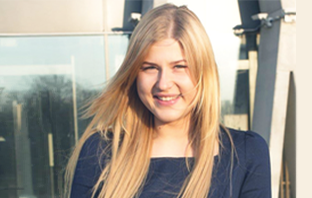