The aim of the SSE Riga “Shadow Economy Index for the Baltic Countries” is to measure the size of the shadow economies in Latvia, Lithuania and Estonia, as well as to explore the main factors that influence participation in the shadow economy. The Index is measured annually since 2009. 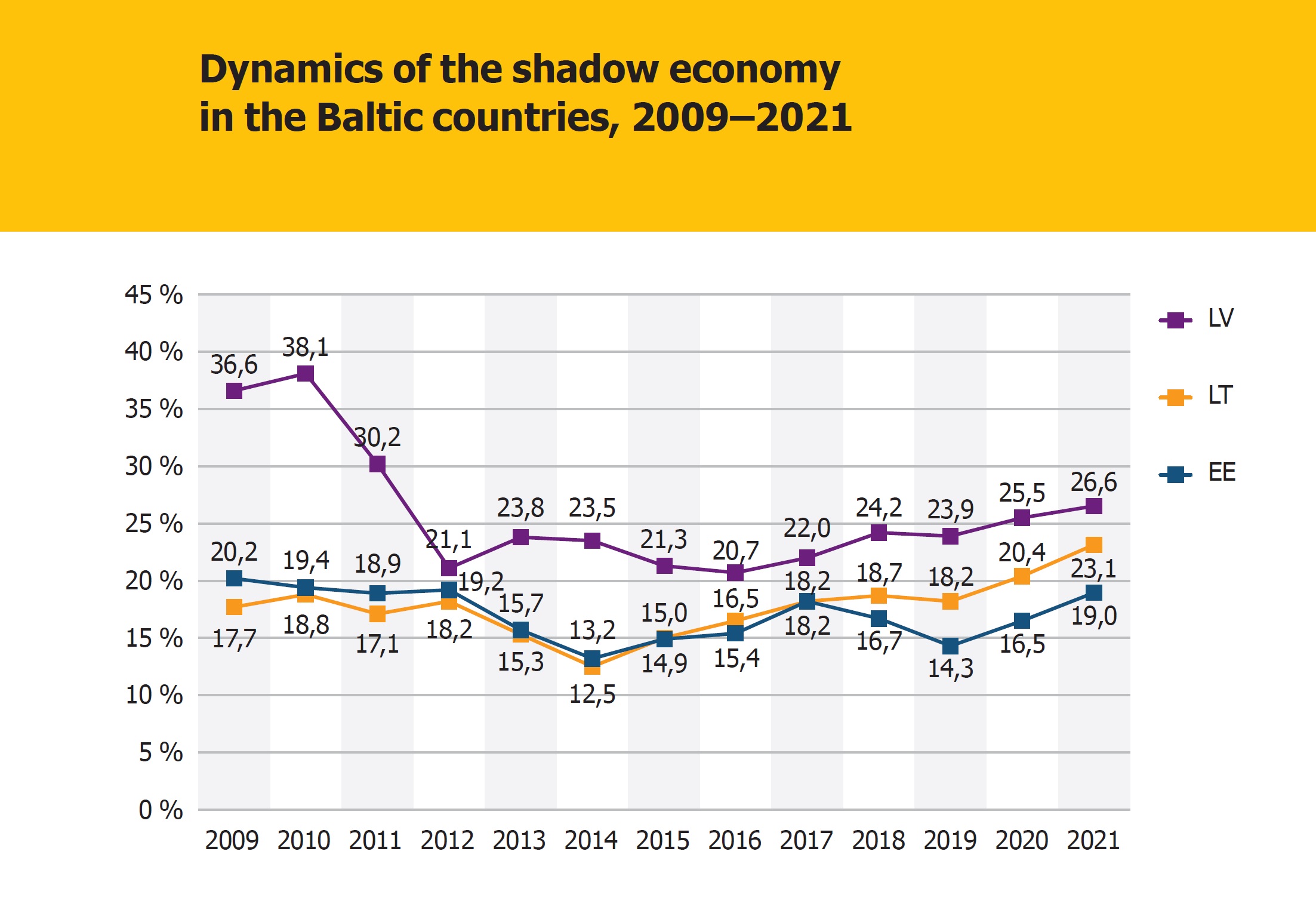 SSE Riga professor Dr Arnis Sauka, the author of the study, highlights: “On the one hand, it cannot be denied that the shadow economy in Latvia, as well as in the other Baltic countries, has been negatively affected by the Covid-19 pandemic. However, unfortunately, the data of our study show that policy makers, especially in Latvia, have not done well in reducing the shadow economy even in the years of economic growth, before the pandemic. This year, in addition to the Covid-19 pandemic, there has also been uncertainty, incl. economic uncertainty caused by the war Russia has started in Ukraine. In such very difficult circumstances, the reduction of the shadow economy in the coming years should not be forgotten, and new, more modern solutions should be found to reduce it. Because still great resources are wasted in the shadow economy that would be useful both for strengthening national defence and for health, education and science, social protection and other areas.”

According to the results of the study, in 2021 compared to 2020, the share of the average salary (%) that entrepreneurs hide from the state, or the envelope wages, increased in all three Baltic countries. In Latvia, however, this increase is relatively small, only by 0.3%, with envelope wages increasing to 23.8% in 2021. In Estonia, the amount of envelope wages in 2021 has increased by 3.8%, reaching 17.0%, but in Lithuania by 0.9%, increasing to 16.2%. As professor Sauka emphasises: “Thus, the amount of envelope wages is still significantly higher in Latvia, which largely explains the differences in the overall shadow economy between the Baltic states.”

The results of the study indicate that the overall level of bribery (as a percentage of the income unofficially paid by businesses as ‘grease money’) has increased in all Baltic countries in 2021, compared to 2020. The largest increase is observed in Lithuania, where this indicator has increased by 3.9%, reaching 12.3%. In Estonia, general bribery has increased by 0.6%, reaching 7.0% in 2021, and in Latvia - by 0.9%, rising up to 9.2%. The level of general bribery in Latvia has not been so high since 2014, in Lithuania since 2015, but in Estonia this is the highest indicator since this study has been made. The results of the study also show that in all the Baltic states in 2021, compared to 2020, the average % of the contract amount to ensure public procurement has increased. Namely, in Latvia there is an increase of 1.1%, reaching 8.0%, in Lithuania - by 2.1%, reaching 7.7%, but in Estonia - by 0.1%, with this component of the shadow economy increasing to 4%.

The brochure of the study is available below.

The recording of the annual Shadow Economy Conference that took place at SSE Riga on March 16, 2022, is available below (only in Latvian).