Julia Kurganovich, a 2017 graduate of SSE Riga from Belarus, works at the Latvian IT company Scandic Fusion and, from time to time, communicates with her colleagues, many of them also SSE Riga alumni and makes presentations to clients in Latvian.

This may seem unusual as SSE Riga has English as its language of teaching and of communication among students from different countries. In reality, Julia says learning some Latvian cannot be avoided if one wants to fully enjoy the SSE Riga experience as well as living in Riga. In her case - she intends to stay in Latvia for a while - being reasonably fluent in Latvian is an asset to be continuously developed.

Latvians seemed to dominate the diverse SSE Riga student body so that “outside of studies, outside of lectures, when the lecture finishes, then everybody starts talking in Latvian. There are Latvians who know each other already before school. So, there are circles of friends already formed. For me as a foreigner in the first year, it was a bit tough, integrating into a Latvian community. And I just figured it out - language is the main thing,” Julia recalls.

Languages aren't a problem for Julia - she speaks five - her native Belarusian and Russian, English, Latvian and, surprisingly, Italian. That comes from doing volunteer work teaching English to children in Italy before she came to Latvia and SSE Riga, she explains and calls Italian “the language of my heart.”

Julia currently works with data analytics and helping companies to structure their data more efficiently. This involves combining her SSE Riga training in business with some IT skills. “I am still applying my knowledge from SSE Riga on the customer company’s internal data structure and  just doing it more from a more technical IT standpoint,” she says.  Scandic Fusion lists the insurance group Gjensidige, Latvia’s state energy utility Latvenergo and the automotive technology company Bosch among its customers. The company was founded by SSE Riga graduates and, according to Julia, as many as a third of its employees are also SSE Riga alumni.

At SSE Riga, like many students, Julia was involved in extracurricular activities, mainly the Debate Club and even today is active in Global Shapers, “a network of  young people under the age of 30 working together to address local, regional and global challenges” according to the movement’s homepage. She was also was “country manager” for Belarus, involved in recruiting new students from her homeland to study at SSE Riga. “I was organizing presentations back in Minsk,” Julia recalls, but is now concerned that fewer applicants from Belarus will be able to attend. A Swedish-sponsored program started in 2011 “to give grants to study at SSE Riga to 20 young people from Moldova, Belarus, Ukraine and Georgia. And every year those 20 students were coming. But this program has finished as far as I know, a year ago,” she says

It looks like Julia, who likes her job, will be staying in Latvia for a while longer (her hometown, Minsk, is not too far away), but a little research reveals another side to the graduate from Belarus - she has blogged in  English and has ambitions to do some writing and journalism. It all started in Hong Kong (or maybe earlier).

Like many SSE Riga students, Julia took the opportunity to study for one semester abroad.  She picked Hong Kong from various possibilities, among reasons, because she is a person used to living in a large city and Hong Kong certainly was that. Her blog posts in English are filled with impressions of her stay in the former British colony, nearly 20 years after it was returned to mainland China at the time Julia studied there in 2016.  Looking back, Julia admits that, from a journalistic viewpoint, she left Hong Kong about two years too soon. Today, perhaps, she would be ready to put on a helmet, gas mask and a “PRESS” vest to cover the political conflict in the streets there, but during her stay, Julia already noticed signs of what was to come. “When talking to locals, they were like, no, we are not Chinese. We are Hong Kongese. There were all the time talking about it,” she says.

Her reflections, three years later are not just hindsight given what has been happening in Hong Kong. In her blog, shortly after arriving in September, 2016, Julia wrote: “During my 3-week stay in Hong Kong, I met many local students in the university, I talked to locals in the streets and listened to the professors during classes – none of them was happy about Hong Kong being part of China and Chinese people living in Hong Kong as such, in some cases to a very radical extreme. People are fearing China imposing their policies and culture, tightening their freedoms.”

Her journalistic interest was one reason why she studied Latvian and has become fluent. “During my time at SSE Riga I was looking for internships in the journalistic sphere. But unfortunately, at the time I was not that fluent in Latvian and that was the main limit why I couldn't do that,” Julia recalls.

Julia may yet try conflict journalism or at least writing about some interesting places, because, as she says, “ actually I would like to go because as they say if you are 20 and if you are not on barricades, then you don't have a heart. If you are 40 and there, you don't have a brain. So, I'm in my twenties.” 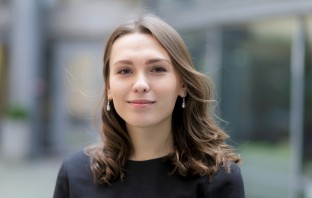