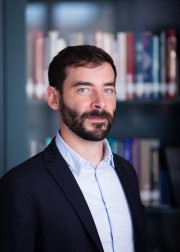 Nicolas Gavoille is an Associate Professor at the Stockholm School of Economics in Riga since 2020 and was Assistant Professor since 2015. His main research interests are in the field of political economy and public economics. He published articles in academic reviews such as the European Economic Review, the European Journal of Political Economy, the International Review of Law and Economics and the Journal of Institutional and Theoretical Economics. He holds a PhD in Economics from the University of Rennes 1, France, and is a board member of the Baltic Economic Association and a member of the Editorial Committee of the Baltic Journal of Economics. He is also a member of the European Public Choice Society, of the French Economic Association and of the Condorcet Center for Political Economy.

Doctoral scholarship from the Ministry of Research, France (2011-2014)

Links to other websites