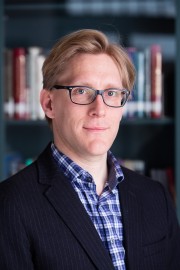 Dominik Gerber joined the Stockholm School of Economics in Riga as an Assistant Professor in 2019, after completing a PhD in political science and a postdoctoral fellowship at the University of Geneva. He has made study and research visits to the University of Rochester (as a Swiss National Science Foundation “Young Scholars” Fellow) and to the University of Helsinki (Erasmus). In his doctoral and postdoctoral positions Dominik has taken on substantive graduate- and undergraduate-level teaching responsibilities at Geneva and at SSE Riga.

Dominik has a research and teaching record in political theory, international relations, and political economy. His main research interests include the role of truth and knowledge in politics, welfare economics, and the founding of the American Republic. He is also part of a Horizon 2020 research project, run at Science Po Paris, which looks into the problem of voter alienation from the democratic process in Europe (GOVERNANCE-17- 2019_RTD (CSA)).

“The Reception of Vattel’s Law of Nations in the American Colonies: From James Otis and John Adams to the Declaration of Independence” (with William Ossipow). American Journal of Legal History 57(4), 521–555. (2017).

“Voters Are Not Fools, or Are They? Party Profile, Individual Competence and Party Choice” (with Sarah Nicolet and Pascal Sciarini). European Political Science Review 7(1). (2014).