Diāna Lāce (Class of 2017): Funding startups and fixing global problems on the side

Diāna Lāce, SSE Riga Class of 2017, still has her study experience fresh in her mind, and it was transformative. It helped her land a job at Overkill Ventures, a new venture capital fund, and she continues to run the Latvian chapter (which she founded) of the worldwide youth organization Global Shapers.

For Diāna, it was a little scary to come from the reputedly best secondary school in Latvia, Riga State Gymnasium No. 1 (with that number, you try to be very good), and find herself in a class where everyone was in some way the best. “There were people from Ukraine and Moldova twice as good as I am at doing some things,” she remembers.

Academically hard and, in certain respects, competitive as it was, Diāna also remembers SSE Riga as a place of intense extracurricular activity that forged close and lasting friendships and useful professional connections. “There were simulated investment competitions and student conferences and all kinds of organizations. I chose the main student organization, the Student Association, and ended up being president,” she recalls. Partly because of the small class size, but perhaps also because of students’ drive to be active in all possible ways, SSE Riga has one of the highest rates of participation (85%) in its central student association among institutions of higher learning in Europe.

“The education is good, there are lecturers from all over the world, and English as the language of instruction and communication among most students is a given,” she says. As for the benefits of building a network while at SSE Riga, Diāna relates: “I was scouted for Overkill by my entrepreneurship lecturer, who is also an SSE Riga graduate.” Before Overkill, where she is Investment Director, Diāna worked with the Latvia-based education technology company Edurio while in her last year at SSE Riga. Overkill, which works closely with Lattelecom, provides funding of up to EUR 300 000 and mentoring services to growing startups.

SSE Riga connections also played a role in founding the Riga chapter or “hub” of Global Shapers, a worldwide network of city-based groups of young entrepreneurs and professionals committed to change and addressing global and local issues such as climate change, education, sustainability, and gender equality.

Diāna was inspired to start the local hub after meeting with Global Shapers at the Stockholm School of Economics and learning that Riga was one of the few places where a hub of the global network had not been started. The organization, linked to the World Economic Forum, has more than 7 000 members in hubs in 169 countries. “I’m guessing that’s more than there are in the United Nations,” says Diāna, recently back from a Global Shapers meeting in Geneva.

The common thread in her professional work and her engagement with Global Shapers is empowerment. “Getting your startup funded and working with young people addressing global issues is also empowerment to make change,” she explains. 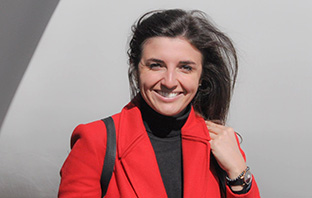