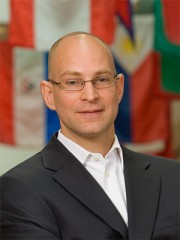 Professor John Branch currently teaches a variety of marketing and international business courses at the undergraduate, M.B.A., and executive levels at the Stephen M. Ross School of Business at the University of Michigan (U.S.A.). Until recently, he also served as Director of Educational Outreach at the University’s William Davidson Institute, which focuses on business in emerging economies; he was responsible for the development and dissemination of pedagogical materials. He is also affiliated with the University’s Center for Russian, East European, & Eurasian Studies.

Prior to joining Ross, Professor Branch was on the faculty of the John M. Olin School of Business at Washington University in Saint Louis (U.S.A.) for five years. He began his academic career in 1993, however, as an Assistant Professor of Marketing at École Supérieure de Commerce de Rennes in France. Since then, he has also served as an adjunct or visiting professor at more than 40 business schools throughout world, including the Rotterdam School of Management (Netherlands), the Zagreb School of Economics and Management (Croatia), ESAN (Peru), and the Sasin Graduate Institute of Administration (Thailand). He was also a visiting scholar at Queen Elizabeth House of the University of Oxford (England) and at the J. L. Kellogg Graduate School of Management of Northwestern University (U.S.A.).

Professor Branch has been involved in a variety of European Union and other government-funded development projects, most notably in the republics of the former U.S.S.R., including Kyrghyzstan, Ukraine, and Uzbekistan, and in those of Eastern and Central Europe. He has also conducted management training and consulting in numerous international companies, including British American Tobacco, Anheuser-Busch, British Telecom, Cargill, Mercedes Benz, Oracle, Coca-Cola, Michelin, Ericsson, and Nestlé.